skip to main | skip to sidebar

The Merlin Theatre in Frome, Somerset has an outstanding reputation for presenting the very best in performing arts and presents an extensive community and education. It is a 240 seat professional venue based on the campus of Frome Community College.

In the past 12 months it held…
o 93 performances
o 22 screenings
o 291 workshops for adults and young people
o 74 days of rehearsal time and support given to professional artists.
o 20,840 participants attended events

Work featured in this exhibition includes…

· The 2006 community pantomime, Sleeping Beauty, which won four awards and 17 nominations at the recent Somerset Fellowship of Drama Cinderella awards including runner up for Best Production in the County.

· Mark Bruce’s production, Sea of Bones, which was produced and premiered at the Merlin in September. It is currently on a national tour performing to sold out audiences and to national press acclaim.

The Merlin Youth Theatre - just one of six weekly workshops that 91 children and young people take part in each week.

The Merlin has been supporting Louise Barrett from Pretty Good Girl to hold regular dance workshops at Frome Youth Centre.

In March the Black Swan Arts and Merlin worked an ambitious project funded by the Arts and Kids Foundation. 450 children from four local schools, Berkley First School, Bishop Henderson Primary School, Christ Church First School, and Mells First School attended the Merlin to see a performance by Theatre Rites and worked with visual artists Celia Smith and Karen Willis to create artwork inspired by the show which was exhibited in the Round Tower.

If you would like to know further information about supporting the Merlin Theatre contact Paula Hammond: 01373 461360, info@merlintheatre.co.uk

www.merlintheatre.co.uk
Posted by Merlin Theatre at 7:54 AM No comments:

The Merlin Theatre and Unlimited Company Storytelling Festival was a fantastic sucess over half term. The festival included 5 events ranging from children's workshops to outdoor theatre on ECOS, storytelling and outdoor story trails.

Over 75 people came to embark upon on an adventure in the wildwood on Friday 1st of June. This was a site specific animated Story Trail performed by the Unlimited Company, a treasure hunt style quest around Frome Community College campus. Starting at the Theatre, children and brave adults made their way around the trail where they encounted characters telling traditional tales as they went (see images below). The stories told included Jack the Giant Killer, The Princess and the Frog, Rapunzel and The Five Little Foxes and the Tiger. At the end of the quest children created their own stories and pictures with assistance from a local artist using materials collected on the trail, they enjoyed it so much they we couldn't get rid of them!
It was a great day and the rain held off!!! 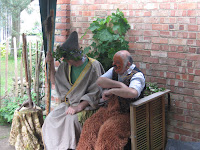 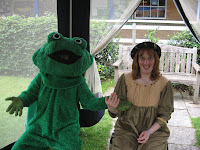 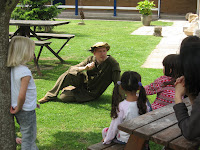 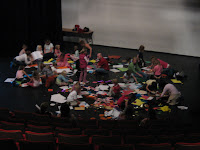 The final event of the festival was the Unlimited Company Inclusive Story Circle on Saturday 2 June. This was a free event for adults and was particularly designed to include people who have learning disabilities, families and carers. This event was part of the ArtsXchange initiative in Somerset which offers experiences in different art forms to people with learning disabilities. It was also Trudy's (a member of the Unlimited Company) birthday, what better way to celebrate! See images below... 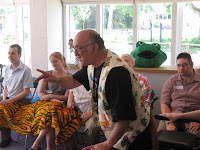 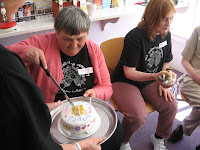 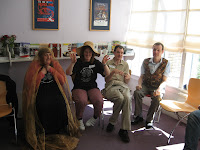 The Unlimited Company are the only professional organisation of storytellers with learning disabilities in Britain. Last year they were selected as finalists in the Southwest regional awards for projects funded by the Big Lottery. They have been training as storytellers for three years, and now perform regularly at conferences and festivals.
Posted by Merlin Theatre at 6:39 AM No comments:

The Great Somerset Arts Adventure came to Frome on the 3rd May to see Merlin affliated artist Niki McCretton in SPACE 50.

ADVENTURE REPORT
After much excitement, preparation and anticipation we finally got to meet the adventurers that we had heard so much about and never met. The secrecy was over they were finally coming to the Merlin Theatre in fabulous Frome!
It was a long journey for some of our adventurers but that didn’t seem to have dampened their spirits. When they arrived they were full of beans and heartily tucked into the food and drink that we had laid on for them. Paula meanwhile gave a spectacular talk on the Merlin Theatre and the wonderful variety of things that we do here. Piers Bizony, local writer and author of Space 50 was also around to give the adventurers a pre-show chat and some information about how the show came into being and some of the inspiration behind it.
Refuelled, the adventurers then boldly ventured where many had been before (the front two rows of our auditorium) where they were about to embark upon an adventure into space with Niki McCretton (one of the Merlin’s affiliated artists) and Jamie Wood in Space 50.
After an hour of intergalactic exploration the adventures came back into the light of our foyer and engaged in a witty and engaging post show chat with Niki, Jamie and Piers. Everyone seemed to relish this opportunity to ask questions and no one was desperate to leave, even though some had to travel all the way back to Minehead. These adventurers were obviously dedicated.
I must say that it seemed to us that this wonderful variety of people had really embraced the Great Somerset Arts Adventure. They didn’t seem to mind us herding them from here to there and completely went along with the whirlwind that was our adventure. We really enjoyed the evening which was an adventure for us as well and which seemed to be over in a flash. It presented a fabulous opportunity to introduce the Merlin to a completely new audience and we wait with baited breath to see what they thought. I hope they had a welcoming experience, that they enjoyed Niki’s show and that they will all come to visit us again, we would certainly love to see them!
Here are some photos of the fabulous adventurers and some of Niki and Piers (author of the book Space 50) to boot! 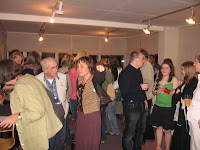 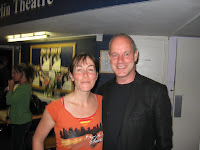 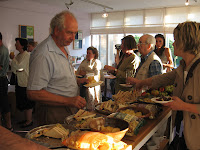 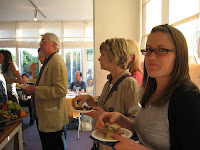 For those of you who are curious about what the Great Somerset Arts Adventure is read on.......
The Great Somerset Arts Adventure (GSSA) is an exciting journey of the arts in Somerset. It could include an exhibition, a film, a concert or a piece of theatre or dance. An Adventurer will sign up for ten different free ‘experiences’, including transport, spreading over 12 months from January 2007; however, they will not know where they are going until they are on board the bus, adding to the sense of adventure! And when they arrive, they’ll be treated to some special touches such as pre-performance talks or drinks, packs for them to take away and incentives for them, their friends and their communities, to encourage them to return.

This is a ‘magical mystery tour’ of the Somerset arts scene encouraging people to try new things and talk to others about their trips ‘after each adventure’.

NB. The really exciting element of this project is that the Adventurers will not know the location or the nature of the event until after they are on board the bus.
The Merlin was the 5th adventure and was a fabulous sucess!
Posted by Merlin Theatre at 9:21 AM No comments: 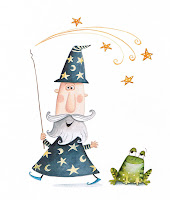 Merlin The Wizard Children's Club
Have a Wizard time at the Merlin, join our new Children's club for Free!
Benefits include...
Loyalty Card - Recieve a stamp each time you see a family show. Once you have visited the Merlin four times receive a Hunting Raven Book Token.
Priority Booking - Choice of the best seats.
Birthday Parties - Book a post-show party (subject to availability) for just £25.00
Invitations to special events - Including workshops and opportunities to meet cast members.
Just pick up your loyalty card next time you visit the Merlin or contact louisa@merlintheatre.co.uk or the box office for further information.
Posted by Merlin Theatre at 3:41 AM No comments:

We had a fantastic finale to our spring season with Merlin Affiliated Artist Niki McCretton and her new show, Space 50, a theatrical journey to celebrate 50 yrs of Space Travel.
As part of the 50 year commemorations, The Merlin Theatre are asked for people to send in their memories of significant moments of man’s journey into space. The stories were collated into a short book which was available at the performance and you can also see them on our Space 50 blog. CLICK HERE to visit the blog.
Posted by Merlin Theatre at 3:16 AM No comments: